"We Can't Talk to Each Other Anymore"

Only my closest friends know I did this.  You’ll never guess where I was. You may have read about this event or even seen clips  of it on TV, but let me describe the scene to you, from my first-hand account: The less-than-desirable weather conditions didn’t hinder any of the fanfare.  People were everywhere – swarming, in their seats, up in the stands, inside and outside the venue staring at huge screens. They had cameras, they were recording everything on the video feature of their phones and uploading to YouTube, they were live-tweeting and posting to Facebook.  I noticed that everyone seemed to look the same, clad in shirts and hats emblazoned with “the team’s” name, and they were waving these banners and signs, hand written or painted with their own “We love so-and-so” depending on whose big “play” was coming up next.  There was press everywhere too.  Each time a new person made their way into view, the crowd went wild, shouting and cheering in a growing wave of euphoria.

As one who doesn’t hold the same affection for this “team”, I have to say I felt really out of place. It’s hard to silence me, I am not usually easily intimidated, but the power of those united around me and seemingly against me, I think they could tell I wasn’t a real “fan”, made me feel small and inadequate. When the people in front of me heard me make a dissenting remark under my breath, they turned around and gave me a nasty look.  I was frightened that if I spoke up, they might go on the attack, throw their popcorn at me, or hit my head with one of their poster-board signs.

I imagine given what we all know has been going on, you know what I’m talking about.

On our recent trip out east, I had the “opportunity” to go with my husband and our kids to watch the New England Patriots practice.  This was, as I was told by my husband, my brother-in-law, all our Boston family and friends, even my kids (who have clearly been brainwashed) a really big deal. So we are sitting there, in the stands on the hottest day imaginable.  My family at my side camouflaged and swimming along with the massive crowd of Tom Brady navy jerseys, cheering, waving these really weird signs, and most notably praising anything Patriots and talking a whole lot of smack, really mean smack, about anyone and everyone else.

Which I really didn’t get since it is was only a practice – not even a preseason scrimmage.  Now, personal disclosure – I am not into watching sports.  But I get I am in the minority, I get that people find meaning and community in the teams they align with, and probably, these teams serve as important psycho-social receptacles for many people’s feelings of frustration, anger, pride, and hubris that would otherwise manifest themselves in more inappropriate and even troublesome ways in society.

And amidst this brewing, bubbling cauldron of “Brady’s gonna kick so-and-so’s you know what this year,” “so and so’s an dummy” signage, and then the subsequent hi-fives, fist and chest bumps, yes chest bumps, all I could think of was how this was just a small picture of the larger “if you aren’t with us, you are against us” world we all live in now, and I started to think about how we can’t talk to each other anymore on the things about which we disagree.

Some of this is a result of modern day social media.  Now, more than ever, we can self-select exactly which viewpoints we want to be exposed to and which we want to block out, so that we might not ever have to encounter the “other side.”  This can give us the false illusion that everyone must hold the same “likes” as we do.  And if they don’t, clearly, they are wrong. 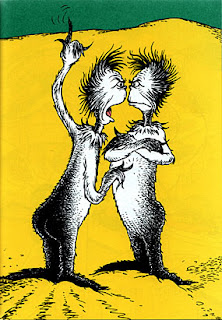 When we do this, something interesting happens: in lifting up the validity and absolute right of our own view, we connect to it deeply and with passion.  We feel it reflective of us, a part of us, and as such we want to defend it, and ourselves, against anything that might threaten it. Essentially, we develop an intimate, humanized relationship with our view and those who hold it, so we cannot separate our view from who we are as a person.  But then, as a result, we completely dehumanize the opposition.  We allow ourselves to forget that the “other” side is a view held by another person – our neighbor, family member, community member, what have you.  We see every conversation not as opportunity to learn and grow through hearing and learning about a different perspective, and instead, we see the other side, the view and the person connected, as a threat – an enemy, that rival team that, whether better than us or not, we will rip to bits so that our side, or really we feel that much stronger, that much more powerful, without a moment’s thought about the damage we might leave in our wake.

And when we either become so wedded to our own views that we can no longer even stand in the presence of the other with a different view, we have a real problem.  The truth is the likelihood of a conversation where disagreement occurs while nurtured in mutual respect is slim to none these days.  As Arnie Eisen recently wrote: we “…so fear to articulate serious arguments.  We seem afraid that critique of a person’s point of view will be taken as critique of the person and cause insult. And fearing barbs, we restrict ourselves to pleasantries.  Minds grow dull on a heavy dose of…what Eisen calls: ”the pleasure of agreement.””[i]  And with that, Eisen brings up the other real draw back to a world in which I stick to my team and you stick to yours and never the two shall meet – real, anesthetizing boredom and stagnation.

While this may very well be the way of our world today, it is not, nor has it ever been the Jewish way.  We Jews wrote the book on how to argue – literally. The entire code of Jewish Law on which all modern Jewish practice is based – the Talmud – is nothing more than a cataloguing of arguments between Jews.  But these weren’t disagreements that escalated into name-calling, threats, and violence.  These disagreements were understood as the basis for holy Jewish living and believe it or not, a pluralistic Jewish practice for nearly the last 2000 years.

Take this story for example: The Talmud describes that two opposing schools of thought – Beit Shammai and Beit Hillel (think Michigan and Ohio State) were in a dispute over a certain halacha – or Jewish law - for 3 years, each proclaiming that the law sided with their respective view.  All of a sudden, a disembodied, Divine Voice announces, “Both of you are right, but the halachah goes with Beit Hillel.”  Since both were right, what was it that entitled Beit Hillel to have the halachah fixed with their rulings? The Talmud gives this reasoning: Because they were kind and modest, they studied their own rulings and those of BS, and were even so humble as to mention the actions of Beit Shammai before their own.”[ii] 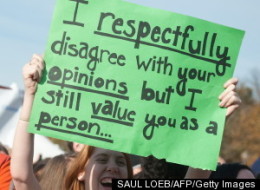 I wonder if we might see a greater willingness to engage in discourse and in fact a return of civility to discourse if we all followed those Talmud guidelines for disagreement.  Because the truth is, disagreement is a cherished part of what it means to be in community, to be a part of a growing and evolving world that moves toward improvement.  Disagreement is the space from which choices and ultimately progress comes.

As you know, tonight marks the 13th day in the month of Elul: the Jewish month preceding the High Holy Days; a time of renewal and reflection.  The death of civil discourse, the pervasive presence of fear, lack of trust, and an odd distortion of accepted group-think that now seems to govern so much of the ways of our world – all of these must necessarily be a part of our work toward teshuvah - as individuals and a community.  We can start this process by practicing the three concepts raised up for us in the Talmud in each conversation we have where we disagree:
1)   Be kind and modest.
2)   Listen to the opinions of others as well as your own.
3)   Come to understand and give respect to the other by stating their view before your own.

Three simple tasks football fans, politicians, and every one of us can easily apply to start to make a real difference in how we engage with each other.

In his master work “I and Thou”, the famous 20th century Theologian Martin Buber professed, “All real living is meeting” – meaning that the highest form of existence is when we sit and really see each other, eye to eye, and hear each other, ear to ear, look at each other, not me against your idea, or you against mine, but person to person, heart to heart, soul to soul.  If we do that, Holiness will dwell within us, God will abide among us.
Shabbat Shalom